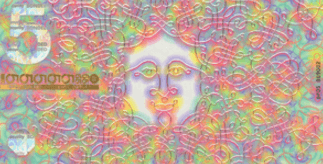 Brixton Pound was presented in September 2009 as a local complementary paper currency which is connected to Brixton. It is suitable for smaller shops and traders, and the money only stays within the local businesses. It was followed by the launch of the electronic B£ pay-by-text platform in September 2011. It encourages people to spend their money locally, ultimately helping protect the local jobs and services.

Every note commemorates a local hero and celebrates their history, art, politics and culture. For instance, David Bowie is featured on the B£10 note, Chicago Bulls basketball player, Luol Deng, is on the regular B£5, while the WWII spy, Violette Szabo, is on the B£20. In addition, the co-founder of the Black Cultural Archives Len Garrison appears on the B£1 note.

On a 5th Anniversary, the Brixton £5 note was designed by no other than Jeremy Deller. His extraordinary and psychedelic result also adds a political and provocative message. Challenging the traditional approach to banknote design he tries to raise the issue of use money and its value in the time of economic instability.

Even though there are many local currencies throughout the UK, the Brixton was the first community to support and present this idea. Supporting local services and businesses means progress for an entire community while spending money in chain stores or coffee shops means more money for already rich chain holders.

Deller´s, special edition features a quote from Karl Marx’s Capital, where he reminds people of the dangers of treating money as a fetish. Furthermore, he thought that money´s value depends on social relations, which is also a motif for Brixton Pounds and any local currency. This note makes you think about it whenever you offer it or receive it.

This is the money which turns simple shopping into a financial activism. It is an alternative, cool and local which can all be observed from that one Brixton £10 note. It has a strong message and a great cause because promoting local in the period of economic crisis takes courage, and it is worth of every compliment. At the time when money started to issue, people were sceptical if it is going to stay.

However, the local community such as Brixton was the best choice to promote and introduce this action.
At first, the Brixton Pound, or B£ means a reduction of choice, which brings up a question why do people use it. However, with their choice significantly narrower people can focus on other details, such as quality of local shops and the chance of improving the community. This is also a good way for all local businesses to prove and improve their skills and services as well. Choosing to buy at the local shop you will receive trust and loyalty of the sellers, while for the chain businesses we are all the same, just regular costumers. That is what makes this money more than the eye-catching design notes.

In the beginning, there was some local resistance because many local business owners did not believe that this will have an effect on the society and that most of the families will rather spend their money in chain stores and restaurants. Besides, they were unable to offer lower prices than the one found in the malls.

However, Deller´s note and the anniversary showed that this proved to be a good way of keeping the situation of the community under control, providing them good service and receiving credits in return. Furthermore, Deller´s fiver also became a symbol that all people can make a positive choice when it comes to spending.